It wasn’t exactly how Harrisburg had it scripted, but in the end after a long day at Sherman Park, the Tigers defeated Lincoln for the Class A high school softball championship with a 12-2 win in the second championship game of the double-elimination tournament.

“Lincoln gave us everything they’ve got,” Harrisburg coach Toby Bryant said. “There’s a lot of tradition over there. We had to persevere and figure it out down the stretch.”

The Tigers entered the game with a record of 29-2 and cruised through their first three games of the state tournament. One of those wins was against Lincoln on Saturday morning. After Lincoln later defeated Roosevelt to reach the championship game where they’d again face Harrisburg, the Patriots were forced to beat the top-seeded Tigers twice to defend the championship they won in 2019.

It seemed a tall order for Lincoln to defeat the Tigers twice in a row to claim the title. Harrisburg defeated Lincoln by a combined score of 20-6 in two wins against the Patriots earlier this season. That, on top of Harrisburg cruising in the tournament, made for an almost insurmountable challenge. The Tigers hadn’t given up a run in the tournament heading into the championship game, outscoring their opponents 25-0 in the two-day process.

With ace Emilee Boyer on the mound for the Tigers in game one against Lincoln, it seemed almost a formality for Harrisburg to lock things up in the first game.

Lincoln had other plans.

The Patriots rocked Boyer in the first game, scoring seven runs on seven hits in just 1.2 innings. Lincoln overwhelmed the Tigers and won game No. 1 in a three-inning shortened game due to the run rule, 12-0, forcing a second and deciding game later in the day.

Harrisburg actually had a chance to make some noise in the top of the first, but freshman pitcher Madison Evans got the Patriots out of an early jam. She got the opening batter to fly out, but then served up eight straight balls to put runners on first and second. She dug in, and struck out the next two batters.

The Patriots made Harrisburg pay for their early missed opportunity in the bottom half of the inning. A two-run home run by Ella Peterson and a three-run shot by Alexis Brady gave Lincoln a 5-0 lead in the first inning.

Lincoln coach Tim Hoover said he’s been preaching discipline at the plate to the Patriots all season. In the opening game, the Patriots clearly took note. They finished with 12 hits, including four home runs after Brady got her second of the game in the bottom of the third. Ashton Dorman hit a two-run shot later in the inning for the game’s final scoring when she blistered a liner down the left field line to give the Patriots the 12-0 win.

“The more you get to see some of these pitchers, the better at-bats you have,” Hoover said. “It’s contagious, both ways. Once you lay off some of those high pitches and you start hitting like that, it’s contagious on both sides.”

After the Patriots exploded in Game 1 and rattled the Tigers, Hoover called his team together near third base, just outside of the Lincoln dugout.

The giddy group gathered, before finally settling down. Hoover looked over his players, leaned down, looked up, and simply said: “Wow.”

Boyer settles down for Game 2

After the 12-0 dismantling by Lincoln in the first game, Boyer went back to the Harrisburg dugout to gather her thoughts. She sat quietly, but when game time struck, the junior delivered. Lincoln managed just seven hits in game two.

"I worked on my rise ball and curve ball a lot more and tried to get my change up a little higher inside," Boyer said. "I was a little frustrated after that first game, but knew I needed to pull together."

For as much as Lincoln was crushing the ball in the first game, it came down to a pair of bunts that got them some momentum in the bottom of the third inning in the second game. Trailing 1-0, Hoover signaled for Norah Christiansen to bunt to open the inning. She reached on the play and advanced to second when Olivia Jensen bunted at the next at-bat. Christiansen and Gabie McConnell later scored on a Dorman single and the Patriots held a 2-1 lead heading into the fourth.

However, things unraveled in the top of the fourth with the Patriots clinging to a one-run lead. After Evans got a strikeout to open the inning, Kylee Slocum reached first after a dropped ball by Lincoln’s right fielder. That error turned out to be costly. Instead of two outs with nobody on, the Tigers rallied for four runs for a 5-2 lead they’d never relinquish.

“We’ve talked since the beginning of the year that you have to take care of the ball,” Hoover said. “We’ve got to be able to make the plays we’re supposed to make, and then sprinkle in the dazzling plays.”border-color: initial; background: rgb(0, 0, 0); cursor: pointer;"> 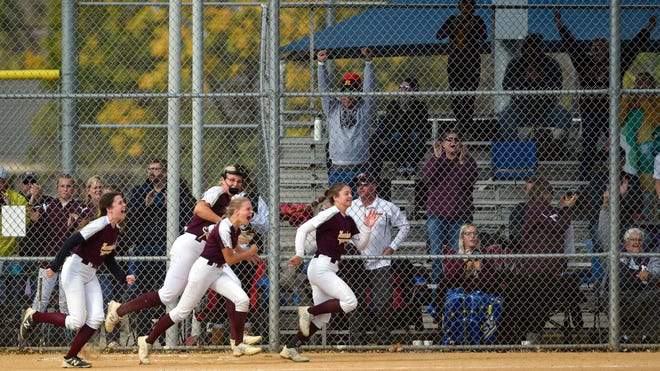