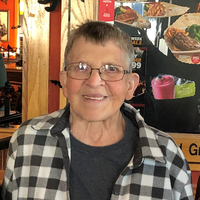 Joyce Irena Walker was born on October 23, 1944, to John Emery Walker and Mable (Milbrandt) Walker in Aberdeen, South Dakota. She was raised in Westport and Columbia, South Dakota, areas with her sisters; Marlyne and Karen; and brothers John, Kenneth, Lyle, and Wayne. She graduated from Barnard High School in 1962 and moved to Sioux Falls soon after. She made the move on her motorcycle with nothing more than she could take on her bike.

She made her living in a variety of jobs, most notably as a photo processor for Harold's Photo. She made her mark however, coaching and managing women’s softball. One of her teams even won the state championship! She was head of the South Dakota Women’s Fast Pitch Softball and was a State Fast Pitch Commissioner for many years. Joyce was inducted into the South Dakota Softball Hall of Fame on October 9, 2010, for her many contributions to the sport. While living in Sioux Falls, Joyce was also the head of Saint Vincent De Paul Society and a faithful member of Saint Michael Catholic Church. She was also involved in bowling and hosting dart tournaments.

Joyce moved to Rapid City in 1998. She loved being outdoors, solving jigsaw puzzles, and pets of every kind. She was a huge Minnesota Twins and Vikings fan. A highlight came last summer when she was able to attend another Twins game with her siblings, the twins, sister, Karen, and brother Ken, for their 70th birthday, with the family filling the Kirby Pucket Suite.

Family and family functions were very important to Joyce. She went out for breakfast every Sunday morning until the virus put an end to that. Every fall for many years Joyce could be found at the Buffalo Roundup in Custer State Park, joined by family and friends. She enjoyed many, many trips to Wyoming to visit family. Lots of her trips were taken atop a motorcycle. Joyce cherished the outdoors whether on the ball diamond, driving through the Black Hills on her bike or up in the mountains of Wyoming.

The majority of her 17 years in Rapid City were spent on an acreage north of town with dogs, cats, horses, and any other stray that wandered through. Joyce battled rheumatoid arthritis for decades. It slowly wrecked her body but never her mind. That was still as sharp as a tack!

Joyce was preceded in death by her parents and her brothers Lyle Walker and Wayne Walker.

She is survived by her sisters Marlyne (Roger) Metzinger and Karen Buss; and her brothers John (Bonnie) Walker and Kenneth (Joan) Walker. She is also survived by many nieces, nephews, greats and great-greats; as well as her special friend of many years Donna Stengel.

Please make memorial donations to the South Dakota Softball Hall of Fame or to a no kill animal shelter in your area.