Obituary for Betty Rislov, Mother of Greg Rislov of Pierre 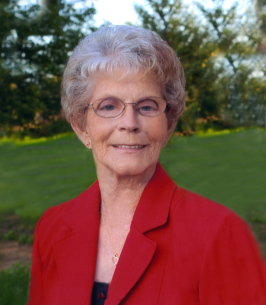 Funeral services will be 11:00 am., Monday, August 19, 2019 at New Helgen Lutheran Church in Florence, SD. Pastor Mindy Ehrke will officiate with music by April Flemming as soloist and Debbie Burdine as pianist.

Visitation will be from 5-7 p.m., Sunday, August 18th at the Wight & Comes Funeral Chapel in Watertown.

Interment will be at the Bergen Cemetery, near South Shore, SD.

Honorary Pallbearers will be Betty's granddaughters.

Betty Mae Rislov was born in Waubay, South Dakota on December 22, 1930 to Harold Betrum and Opal Pearl (Pierce) Ohnstad. She grew up in northwest Codington, County, rural Florence, South Dakota. Betty attended rural country school and graduated from the 8th grade. She then finished her education from Florence High School, graduating as Valedictorian of her class of 1949. She worked for one year at the Farmers & Merchant’s Bank in Watertown and then went to work for Schwieger’s Body Shop until marriage.

Betty married Donald D. Rislov, while he was on a two week furlough from the Army, on August 11, 1951 at Goodhue Lutheran Church in Florence. The couple lived in Ft. Hood, Texas until April, 1953 when Don was discharged. The couple returned to South Dakota and Betty's life was that of being a full-time mother and farmer’s wife. When their children grew up and left the farm home, Betty went to work full-time at Quadee Rubber Company in Watertown, which later changed their name to Minnesota Rubber. Don farmed for many years until illness forced him to retire in 2007. Her beloved husband, Don passed away on August 8, 2015.

Betty's life centered on being a farm wife with seven closely-grouped kids, all of whom graduated from Florence High School, gathering with many relatives at special events, and missing very few of the church events honoring God and other parishioners. Her special moments came when the grandkids arrived. She managed a packed house on holidays and her grandkids will always remember those overnight campouts on the living room floor. Her life was simple in many ways, but very rich in what she and Don believed was most important. Her family is very proud of the way she and Don faced their challenges, yet never lost their focus on what meant most to them.

She was preceded in death by her parents; her husband, Don; her granddaughter, Kimberly Kay; step great-grandson, Steveland Gillespie; two brothers; and one sister.